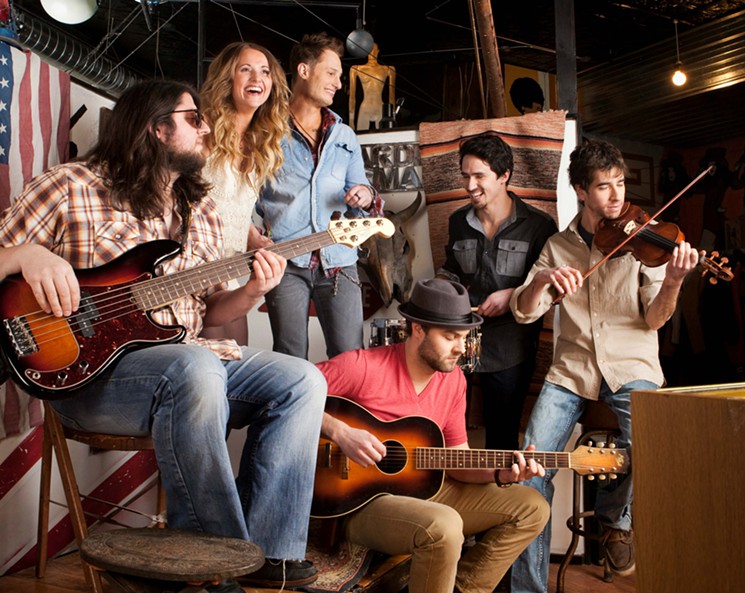 As a country band, it seems Maiden Dixie should be getting their hands dirty in the bars of downtown Nashville. But they'e in Minnesota, a place not entirely synonymous with original country music.

Luckily they'll be able to represent this great state when they take the main stage at WeFest this weekend in Detroit Lakes, Minnesota, for the second year. The headliners this year are Blake Shelton, Miranda Lambert, and Rascal Flatts. While it's a popular festival, the band's pretty confident about their set.

“Of course there's always butterflies and nerves, and things like that,” says Jesse Becker, 29, the group's male lead vocalist. “But, you know, we've been together a long time now, and it's comforting knowing that we know what we're doing.”

While they they've only been together a handful of years, the band has evolved a lot. Bassist Drew Sherman, 28, and and guitarist Jonathan Krentz, 25, met while in the army band. After their time was up, Sherman stayed in while Krentz went to music school at McNally Smith College of Music.

“As soon as we got back I joined like the first crappy country cover band I could find,” says Krentz, sitting out in the backyard with the rest of the band at a table on a sunny June evening in St. Paul at Sherman's house.

Shortly after, Krentz called up Sherman and asked if he wanted to start their own country cover band, which would slowly evolve into Maiden Dixie. Krentz knew Channing Himes, 26, from school, and she was the only female country singer at their school so he asked her to sub in for a gig.

“Jon sent me a list of songs, and I was like, 'Yeah, sure, why not?'” Says Himes, adding that after that show they told her where the next gig was. “I was like, 'Wait a second.'”

She stayed with the band, and that gig was actually her first time meeting Becker. It was just a four-piece band that would soon expand with Zachary Scanlan, 28, and Tyler Kloewer, 25, thanks to various school connections.

The members' influences range in all directions from classical to hip-hop, but most of them cite '90s country music as a key influence. Becker also adds that everyone had their punk-rock phase, a comment that was met with overwhelming agreement.

As each show passed the band's chemistry improved through countless nights of covers. On stage, they're a group of friends having the time of their lives and inviting the crowd to have fun with them. Off stage, they've got a family-like bond. They play off each very well, and so often that this reporter needed to use three different recording devices to get the whole conversation.

At a certain point Maiden Dixie decided to start writing original music. That's not always easy to do when you're only doing covers. Fortunately, the fans were pretty receptive.

“I've been really impressed with how our cover band fans are now our original music fans,” says Sherman.

The first songs they introduced into the set was “Smooth Talkin' Man,” written by Himes and Krentz, and “She Don't Look That Lonely.” Those songs ended up on their debut, Little Black Dress, which was recorded during what Becker calls a “discovery period” for the band at Moose Lodge in Nashville, TN. But they knew there was something special when they played to a packed crowd for the release show at the Pourhouse.
The album was recorded at the Moose Lodge in Nashville with studio musicians. Becker calls it a “discovery period,” because they didn't really know what the band was going to be yet. Himes says the work ethic of the studio musicians definitely inspired everyone to up their game for the next record.

“I know you guys came back and just were practicing your butts off for this album,” she says, looking at the rest of the members.

After the album was done and released they had a renewed vision of what Maiden Dixie was going to be. They lost a member who didn't want to go in the same direction so others picked up the slack.

“We discovered a lot about each other,” says Becker.

With the six-piece band in place they started doing more shows and working on the next album. But they also needed a manager and producer.

Chuck Thompson of Thompson Entertainment Group in Nashville, TN found out about them after friend at radio sent him one of their songs. He flew out to see one of their shows after having a few conversations with Krentz.

“I walked into the club and was simply knocked out by what I saw, what I heard and the way that the crowd responded to their performance,” writes Thompson to City Pages in an email.

They first met producer and singer-songwriter Kevin Bowe at a gig they were playing where he was on the bill with Alison Scott. Bowe tells City Pages via email that the first thing that struck him about them was they were “hardworking” and “humble.” After he saw them perform the first he could use to describe them was “fun.” Then there was their songwriting as well.

“I expected great vocals and instrumental power but truly great songwriting is very rare, more so than people think, especially at their young age,” Bowe wrote, and added that he was “floored “ when they first played him “Story of Our Own.” “Sounded like vintage Nitty Gritty Dirt Band to my ears.”

They were actually told about Bowe after the gig when a friend recommended him. The first meeting lasted two hours, and they were sold.

“His mentality towards the project was, 'We're gonna make it right, we're gonna do it well,'” says Scanlan.

Their sound is noticeably different as well. While their debut is very much country-rock, Unsafe & Sound has a very organic feel to it. The change in sound wasn't intentional, it's just how the songs came out.

Since the album's release the band has been keeping busy playing shows, and even shooting their first original video for “The Road," due soon. The album has done well, too, selling as many copies in the first month of its release as their debut sold the first year and a half of its release. They also plan on recording and releasing a Christmas song in November.

They're slowly venturing outside of Minnesota as well, booking dates in Milwaukee and hopefully Nebraska. Kloewer distributed their music to some producers and musicians when he was in L.A., and got all positive feedback.

“It reaches to a wider audience than just country fans,” he says. “I think that's what's really cool.”